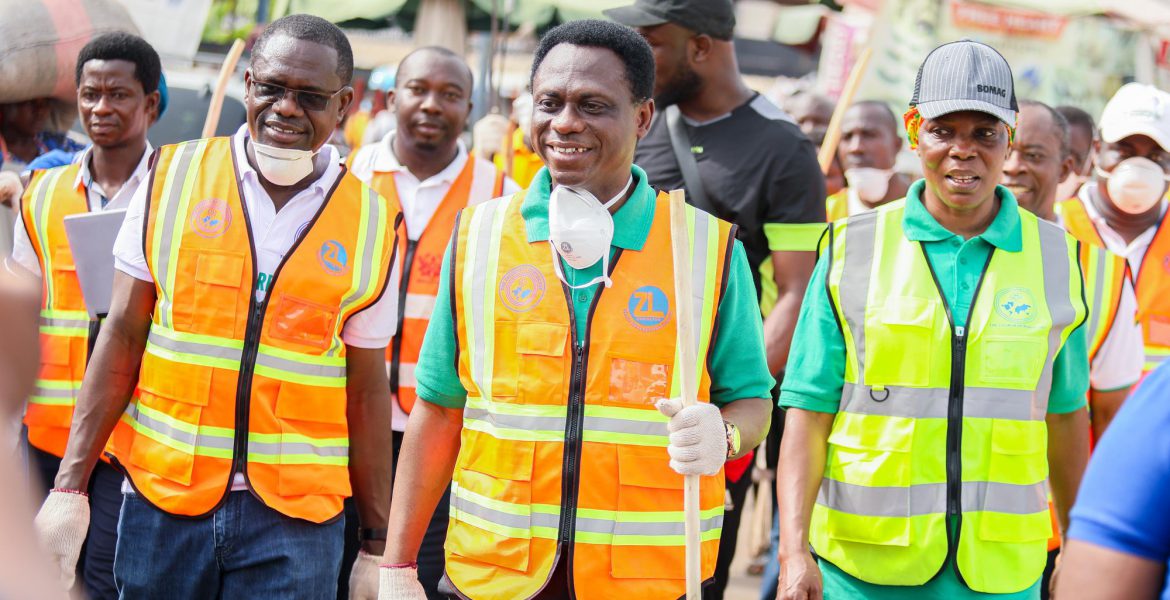 The Chairman of The Church of Pentecost (CoP), Apostle Eric Nyamekye, has urged citizens to be conscious about environmental cleanliness to protect the environment.

He explained that “every human being must know that the first duty God gave us was to take care of the earth; if we do not manage it well, we will lose it. God wanted us to manage earth so that we will benefit from it. This was the first mandate that was given to us before Christ came, hence we must be a good steward of the environment.”

He said this in a side-line interview with GPCC NEWS Team in Accra during nationwide clean-up exercise.

Apostle Nyamekye who is the Second Vice President of Ghana Pentecostal (GPCC) noted that taking care of the environment is not the responsibility of the government alone but a collective responsibility of all members of the society.

“The environment is everyone’s business because we all live in the environment. Mosquitoes do not care about your religious or political affiliation, if it comes in contact with you, it will bite,” he said.

Highlighting on the Environmental Care Campaign, the Chairman said it was birthed from the 5-year strategic vision of the church; “Vision 2023: Possessing the Nations,” which seeks to influence every sphere of society with values and principles of the kingdom of God.

“The vision has a three-prong strategic approach. The first one is to equip church members to transform society. The second is to re-align our existing structures and institutions to support the new vision; and finally, the third is to transform society and partner the government to bring about community transformation. It is the third strategic approach that has to do with the Environmental Care Campaign,”

“As a church, we are concerned about the pollution of the environment; air pollution, noise pollution, pollution of our water bodies and the filth in the nation. We launched the campaign in 2018 and we look to sustain it for the next five years. Last year, we embarked on clean-up exercises across the country, but this year we are taking a different approach,” he said.

The Revered indicated that although The Church of Pentecost is leading the campaign, it is important that all stakeholders (Churches, Muslim communities, State institutions) come on board to make the necessary impact.

“As a church, we believe that we have enough numbers to lead the agenda. However, we are also hoping that other churches and stakeholders will join us in order to make the desired impact so that the transformation agenda that the church is envisaging will become a reality.

“We don’t want to clean for others to litter. This is why we want to bring all stakeholders together, so that, beyond the cleaning, we would put measures in place to curb the indiscriminate disposal of waste in the country,” he explained.

The Chairman, however, advised that sanitation measures should be tailored to the specific need of every community.

Touching on how the Environmental Care Campaign would augment the President’s resolve to make Accra the cleanest city in Africa, the Chairman said “It is good that the President has declared his intention to improve the sanitary conditions in the country. However, when we talk about transforming society, it is not just a government agenda or a political issue. It is neither secular nor spiritual, it is a collective responsibility because we all live in the environment. So, as we clean the gutters and undertake this campaign, we are sure it will get to the corridors of the Presidency and it would serve as a wake-up call to government to continue to do more about the environmental issues in the country”.

Sharing his thoughts on the challenges with eradicating illegal mining (Galamsey) in Ghana, the Chairman said although the government has shown some commitment in the fight against the menace, enough has not been done to effectively deal with the problem.

“We have done something about illegal mining, but not enough. If we had done enough, our rivers would have become cleaner than it is now. I think that all stakeholders must be engaged to help deal with this problem. This is not a political matter; the chiefs and other stakeholders should be involved to bring about proper regulatory measures. Illegal mining is not an insurmountable challenge. There is always a way out of a problem, and it takes the people of this generation to solve the problems we face today. It is only that some people are unwilling because they are benefiting from the problem.”