Home Parliament to continue sitting despite suspension of public gatherings 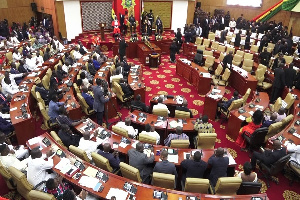 Parliament to continue sitting despite suspension of public gatherings

Parliament will continue to sit to legislate and perform other duties expected of it despite the suspension of all public gatherings in response to the COVID-19 scare.

The country had confirmed six cases of the COVID-19 as at March 15, with President Nana Addo Dankwa Akufo-Addo announcing measures to curb the spread including suspension of public gatherings for four weeks and closure of universities, senior secondary and basic schools indefinitely.

On Monday the President summoned the Speaker of Parliament and Leadership of the House to the Jubilee House for an emergency meeting, believed to be on the pandemic, at 1500 hours.

This led to the suspension of sitting at the plenary.

Before adjournment, the Majority Leader Osei Kyei-Mensah-Bonsu, said the House would continue to sit to do its business.

“Mr Speaker, it is imperative that Parliament sits. The President, when we met him even want us to do some work, on some constitutional instruments, which require us to take a decision of this House by supporting with a vote of not less than a half of the entire membership,” Mr Kyei-Mensah-Bonsu said.

“So people should not be simplistic in their rationalization or extrapolation of what the President has said to mean Parliament should have 25 people sitting at a given time.”

“How do we take a decision? Mr Speaker, the quorum number required for taking decisions is constitutionally set, and we cannot do otherwise.”

The Second Deputy Speaker, Alban Bagbin, who was chairing proceedings, reiterated that all Members of Parliament were enjoined to move back to the House to do business.

He stated that even when a country declares a State of Emergency, Parliament continues to sit to take decisions.

“Tomorrow, we want to see all MPs that are not disabled to come to the House to do national business for Mother Ghana,” he said.

Meanwhile the Majority Leader has laid the Public Election (Registration of Voters) (Amendment) Regulations 2020, before the House.